A long time ago, before I had much personal exposure to Alcoholics Anonymous or the culture of recovery, I had a wonderful yoga teacher who had apparently done some 12-step work at some point in his own getting-sober project.  He didn’t talk about it much, but in retrospect I can see its influence all over his teaching.  I remember he once mentioned the concept of “higher power” during a particularly challenging moment in a yoga class, and then he said something to the effect of “It doesn’t matter WHAT your higher power is, it could be Jesus Christ or it could be a doorknob, the important thing is that it’s not your own ego!”

I’ve done some recovery work of my own now, and I’ve had enough exposure to other people’s recovery (and lack thereof) to have a deep appreciation for the concept of “higher power”.

I have all kinds of issues with “god”.  Who doesn’t?   My 20-year-old son told me recently that as a young child he envisioned god as a giant man with a long white beard and flowing robes. So did I. I guess as human beings it’s hard not to project our own experiences and emotional baggage onto the mysterious forces that we sometimes refer to as “god”.  It’s okay as long as we are aware of it.

When someone says “I don’t believe in god” or “I believe in god“, neither statement means a thing to me without context.  In fact, both statements could mean exactly the same thing.  So in the final minutes of the debate tonight, when Mitt Romney threw out the comment “My passion probably flows from the fact that I believe in God.”, it sounded to me like he was saying nothing at all.

Because I had a completely non-religious upbringing, I have a different pile of baggage about god than some of my spiritually brow-beaten cradle-Catholic friends and others I’ve known who as children were subjected to all sorts of religious nonsense.  As an adult, the Catholic religion gave me a way to rebel against my non-religious upbringing.  It offered me a preliminary framework in which to explore the idea of god, and gave me some tools to use in the process.  Religion offered me some good things that can be tough to find in our society, and for that I am grateful.  At the same time, I found out pretty quickly that I am not at all okay with aligning myself with institutionalized racism, sexism, homophobia, and other hurtful human behavior particularly in the name of god.  I know the difference between right and wrong, and my conscience tells me I cannot abide this.

What I can abide is the idea of my “higher power”.   It’s not THAT hard to imagine that there are powerful forces around me that I can lean into that are not my own damned ego….forces like community, like love, or like that wonderful doorknob, the one which can help me open the door to something better for myself over and over again.

Recently at my yoga studio, I picked the card pictured from a box of cards with quotes by the Sufi leader Pir Vilayat Inayat Khan. Check it out. 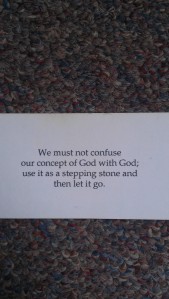 15 thoughts on “In tonight’s debate, Mitt Romney said he “believes in God”. What does THAT mean?”

A difficult story to tell…